Last week was my spring break and 3 of my roommates and I decided we would try to pack a lot (reasonably) into our 10 day break. The first stop was 3 nights in Madrid! Our flight was at 6:30 AM on Friday 2/22 from Rome so we took a train down from Perugia to Rome the night before. Our flight left from Rome’s Ciampino airport (smaller than Fiumicino) because we flew Ryanair. We stayed in a lovely, quite comfortable place overnight: a corner of the arrivals (open 24 hours) section of the airport. We had luxurious accommodations such as a clean floor (I’m actually really impressed with how clean it was), and well, that was about it. I tried falling asleep using my coat as my mattress, blanket, and pillow around 11:00 PM and slept very lightly until about 4:40 AM when we headed over to the check in area. I would wake up and random parts of my body would have pins and needles – but hey, it was free! What can I say, it was an experience. There were many others who were more prepared than us with sleeping bags or blankets, but still there were many such as ourselves who only had their luggage or the clothes on their bodies.

Friday:
Once we were in Madrid the next challenge was finding out the best transportation to our apartment. Luckily one of my roommates is fluent in Spanish and another one of my roommates is a master navigator – I’d say we did well for ourselves! Using airbnb.com, which I highly recommend, we had found an apartment in the center of Madrid with a bedroom (double bed), living room (corner sofa turns into double bed) with a small dining area, bathroom, and kitchen – all for only 14 euro a night per person. The apartment was very clean and cozy with a really great location. We unloaded our things then ate a delicious lunch at a local corner cafe/restaurant. Spain food is quite amazing I have to say, it was very hard to choose between all the options (that is, after I had my roommates translate what they actually meant for me)!

After lunch we set out to explore the city. During check-in, the apartment owner gave us a map and circled and explained all the best places to see in Madrid. He gave us great advice and the map really came in handy!

While exploring during the day, we stumbled upon a very small outdoor market. A man offered us samples of some sort of food which we ate. I was holding a coffee at this time and he spoke something to me in Spanish. I asked my friend what he had said and she responded hesitantly, and a little confused, that he had asked for some of my coffee. He repeated himself and she again translated saying that he was asking for some of my coffee since he had given me a sample. The bizarre thing was… he was serious! He considered it an exchange I suppose. He had a completely serious face and as I mumbled something unintelligibly because I don’t speak Spanish, and then walked away, my roommate said that he called me cheap! I didn’t ask for the sample, he just gave it to me! But anyway, either different cultural behaviors or he was downright strange.

Friday continued with more site-seeing and, unfortunately, rain. Luckily most of our plans were for the next two days. We bought groceries for our stay (preparing most of our own meals saved a lot of money!), a benefit of having an apartment with a kitchen, and prepared dinner (linguine with tomato sauce, garlic bread, broccoli and carrots). It was incredible to sleep in a real bed again, let me tell you!

Here are some pictures of Friday: 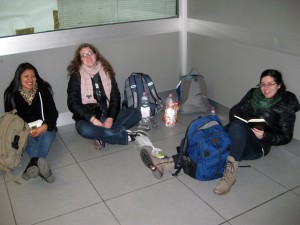 Our corner of the airport. 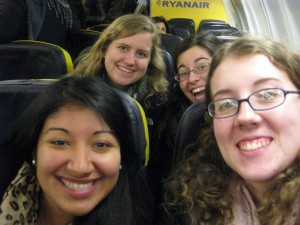 On our first flight! Our first of 5 over the course of the week. We didn’t have nearly this much energy for our last flight. 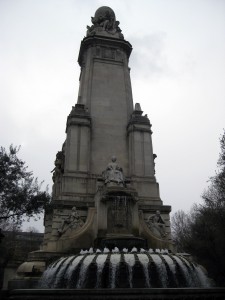 The back of Monumento a Cervantes (I’m not sure we realized this wasn’t the front – oops!).

At the Palacio Real!

Saturday:
This was a big walking day. We saw a lot of sites! In the late morning we ate churros with hot chocolate (so delicious!). Later, after more walking, we ate our bagged lunches in the Parque del Retiro. It was quite nice to be surrounded by trees again and although it was chilly, it still felt like spring with the sun shining. Walking, more walking, more walking and finally we headed back to our apartment. The apartment owner invited us to the vinoteca (wine bar) where he works so we went there for some wine and tapas – again, delicious! On the way to the vinoteca I had another odd sort of incident. It all lasted about 10 seconds, but it was memorable! We were turning a corner and a woman, out of nowhere, approached me (not anyone else in my group who all might look more Spanish than me) and asked for directions in Spanish. She was speaking so fast that my hands just shot up in the air, similar to the “hands up!” signal (except not that dramatic and hands only to about my shoulders), and again I uttered unintelligible sounds trying to convey that I had NO idea what she was saying! Alas, the troubles of a traveler. Finally, we sought out to eat dinner at a normal Spanish time…10:30 PM. We found the perfect place though, and ate paella de marisco (a traditional rice and seafood based dish). I would try to recreate that dish if I could! I highly recommend it.

Below are some pictures from Saturday: 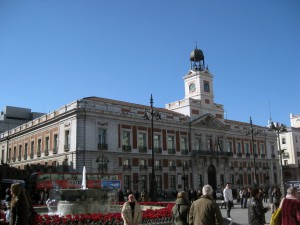 A famous statue of the bear and tree. 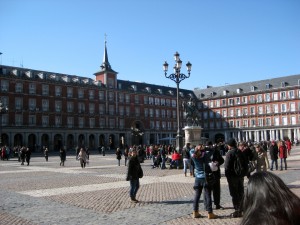 The front of Palacio Santa Cruz. 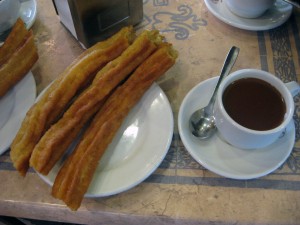 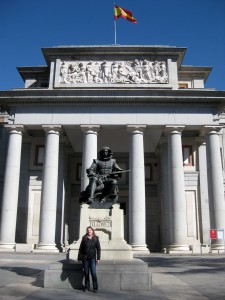 Outside of the Museo Nacional del Prado. 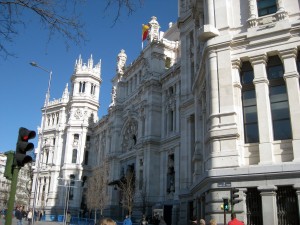 Outside of the Palacio de Cibeles – such a beautiful building against the blue sky! 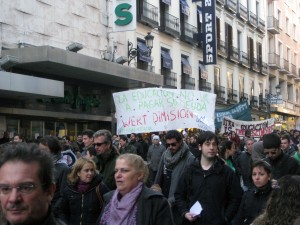 While we were in Madrid there were several protests going on – this was one of them. Apparently this day 40 people were arrested during the protests. 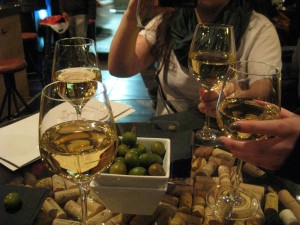 Delicious wine and olives at the vinoteca! 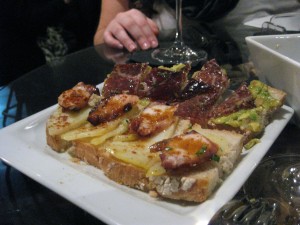 Delicious tapas! One was guacamole with a type of meat and the other was cheese and octopus.

Sunday:
In the morning we walked to the biggest flea market in Europe called El Rastro. It was quite impressive, spanning many streets – although I wasn’t so much a fan of it being on a hill. We were actually early to the flea market so they were still setting up when we got there. It was interesting to see that people were actually flocking to certain tables, trying to find treasures among piles of old objects. There were many items on sale at the market once it was up and running. These ranged from clothes to DVDs to antiques to household items to jewelry and more (typical flea market style). We ate lunch with friends of one of my roommate’s parents who are living in Madrid. They were so sweet! Lunch consisted of a variety of small plates that we all shared – a kind of Spanish ham (similar to Italian prosciutto), cheese, chorizo (one of my favorites), olives, and more. Afterward we went to a pastry shop and ate pastries with hot chocolate or coffee. Afterward we were feeling full and tired, so we took a bit of a siesta. One movie and a half later, we left to go to a flamenco dance show. This was one of my favorite parts of the whole trip and probably my favorite part of Madrid. There was a singer, a guitar player, and three dancers. I was right next to the stage and I could feel every time they stomped their feet on the stage – it was a great experience! That night we had dinner (rice, chicken, and an assortment of leftovers) at around 11 pm. I can’t say that we really went to bed that night so much as took a nap because we had to be out at 3 AM to catch a bus to the airport for our 6:30 AM flight to London! It was gorgeous in the morning because the moon was almost (or actually) full and combined with overlooking the city from the plane – just beautiful. 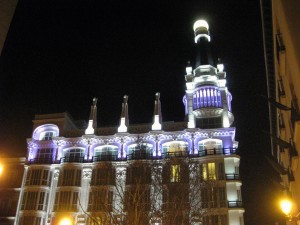 A building I particularly enjoyed at night because of its colors. 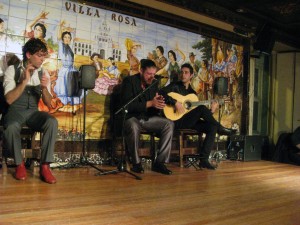 At the flamenco show – this is the singer and guitarist. 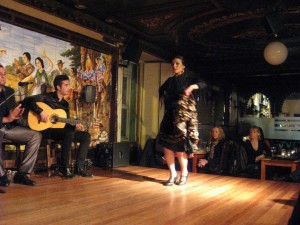 The first of the three dancers to perform.

And the third dancer. 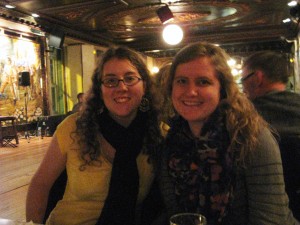 Me and my roommate enjoying the show!

Notes:
Unfortunately I still don’t know where and when it is appropriate to tip at restaurants or bars.