Thursday:
The third city I visited over spring break was Dublin, Ireland!  Luckily, the flight from London to Dublin was NOT at 6:30 in the morning, instead it was around 10 AM.  It was misty when we arrived (what’s new?) and we took a city bus to Camden Street which is the area where our hostel was located.  We stayed at the Times Hostel (average 21.25 euro a night per person) which I would recommend.  It has a great atmosphere with nice staff and accommodations.  We stayed in a private room with a bathroom in our room instead of a shared bathroom, like many hostels I have seen.  Once we were settled in, we ate lunch at a local pub called Devitts.  I got the sandwich and soup combo for 6.50 euro: a hot stuffing and chicken sandwich, mushroom soup, and coleslaw.  It was a delicious meal!  We then set out for the day to explore the city. We walked around, did some shopping, and ate dinner at a cafe. This was not a “local” style meal – I got breakfast for dinner (again, what’s new?) – but hey, it was the first time I had pancakes in months! That night we went back to Devitts because they had some live music and it was a very convenient location for us.

Here are some pictures from Thursday: 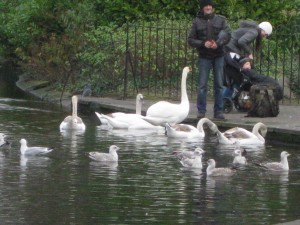 A walk through St. Stephen’s Park. 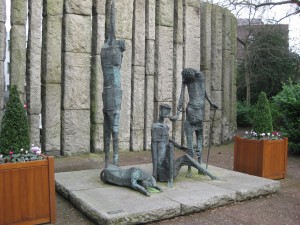 This scene reflects on the potato famine. 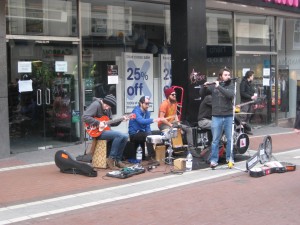 This was a band playing on Grafton Street, a big shopping area in Dublin. 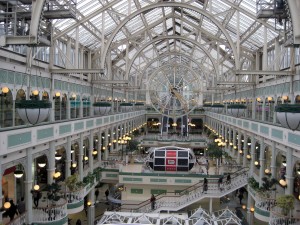 Inside a shopping center – very pretty! 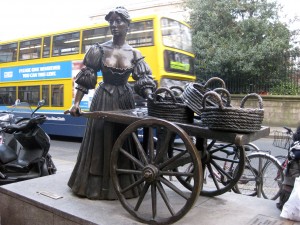 Friday:
Friday morning we ate breakfast at the hostel (breakfast is included in the price, although we had to pay for towels). At 11 AM we went on a walking tour of Dublin to see the major historical and cultural sites. After the tour we were hungry and ate lunch at a pub to have some beef stew. The stew had slow cooked beef and Guinness – it was so delicious! To make the experience better, we ate lunch with a Brazilian we met on the tour named Fabbiano and there was a live band playing classic Irish music. It was a two person band – one guy singing and playing the guitar, and one guy playing the accordion. Afterwards, we split up and two roommates and I set off for the Guinness Storehouse. We walked along the river, a little too far I might add, and after a few correctional turns finally made it to the storehouse. We walked through the storehouse-turned-museum and settled in at the top level where you get a “free” pint of Guinness and are able to see a panoramic view of Dublin. I can’t say I enjoyed the beer since I don’t really like beer, but it was an experience none the less, and the view was cool! On the walk back we picked up some groceries for dinner and made a simple meal of linguine with tomato sauce, garlic bread, and carrots and green beans. After dinner, we went on a walking ghost tour of the north side of Dublin. Although it was not quite what I expected, I still really enjoyed it! There was one building in particular (an abandoned industrial type building) that was really creepy – lots of glass windows. I will say it was really cold on the walk (which lasted about 2 hours). Unfortunately, I think that caused me to get sick for the next week or so (nothing too serious, just cold-like symptoms for a bit and a cough), but it was worth it.

Here are some pictures from Friday: 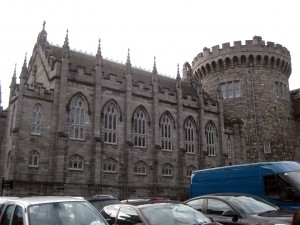 Dublin Castle – the first site on the tour. 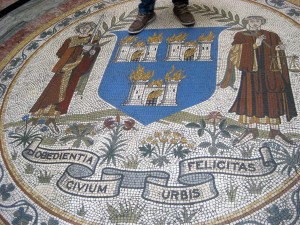 A mosaic on the floor of the city hall. 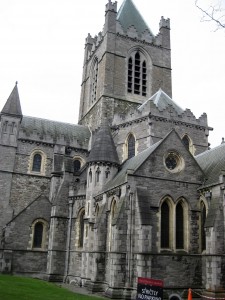 St. Patrick’s Cathedral! Apparently one side of the church is sinking. 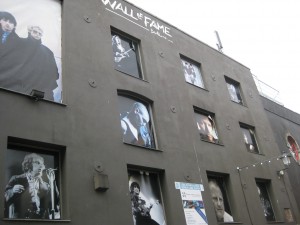 Dublin’s Wall of Fame!  Most prominently on the upper left (although cut off in my picture) is U2. 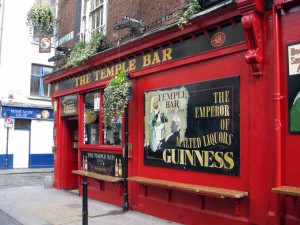 At Temple Bar (which is actually an area of Dublin, not just one bar as I falsely thought!). 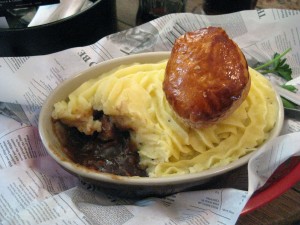 The slow cooked beef stew made with Guinness beer was divine! 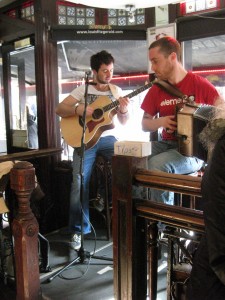 The two person live band – they were really good! 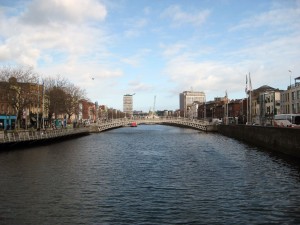 A view overlooking the river (divides the north from the south side). 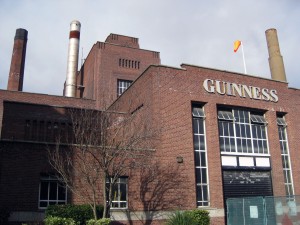 On the way to the Guinness Storehouse! 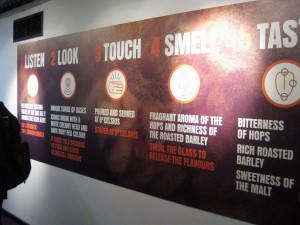 The five senses of Guinness. 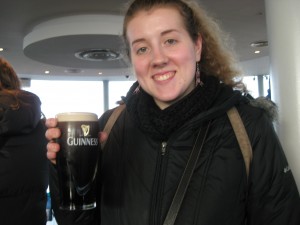 Finally made it to the top! 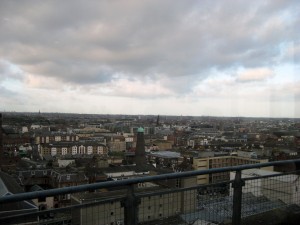 A view of Dublin from the top floor of the Guinness Storehouse (called the gravity bar). 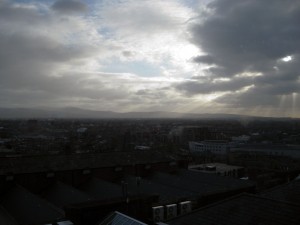 Another view of the city. 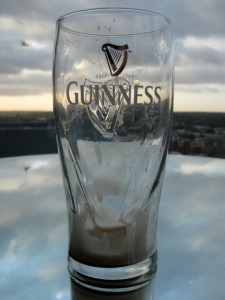 Proof I finished my glass!

Saturday:
We woke up early to catch an 8:30 AM flight to Brussels. We ate breakfast at the hostel, which they might have put out especially early because of our early departure (it was very nice!). Similar to the previous morning we had toast (with butter or jam), cereal, coffee/tea, but this day we were early enough to also have fruit and some cheese and ham. We also randomly had bought a breakfast loaf the night before which was a glorified yule log (yes, a yule log). We consumed most of it, but it was too sweet to eat in the morning in my opinion. Unfortunately, we had to eat very quickly to be on the shuttle in time (the hostel called it for us) to get to the airport.

Overall, I really enjoyed Dublin and wish I had more time to see the rest of Ireland, including the amazing Cliffs of Moyer.