This past Thursday when I returned from my Italian class my roommate told me, “So Zach emailed us asking if we want to be interviewed by Diane Sawyer.” I honestly thought she was just lying to me because it caught me so off guard. So once I realized she was actually being serious I checked my email and there was actually an email from my Sustainability of Food/Business of Wine professor asking if I wanted to be interviewed by Diane Sawyer. I, of course, said I would be available! My roommate guessed that it had to do with the Amanda Knox trial and, sure enough, she was right. Four other students and I met up with four Umbra staff and we all went to the central fountain by the big stairs in front of the main church (so basically right outside of my apartment).

We waited maybe 10 minutes or so and then my professor, along with the camera crew, producer, and Diane Sawyer walked into the square. We split up into two small groups and she interviewed my group first. As my roommate had guessed, she asked about living in Perugia through the lens of the Amanda Knox trial. While I’m not sure we gave her the answers she was looking for, it was a really cool experience! I’ve loved some of her news stories in the past and being a (although small) part of one now was neat.

I attempted to take some pictures of Diane Sawyer and the interviews with the other group, although it was hard to get a good shot. 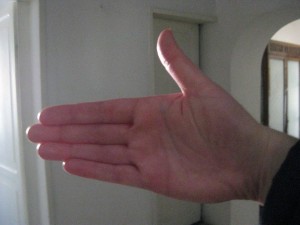 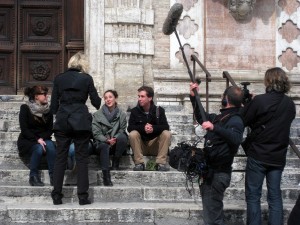 Here she is interviewing the other small group.

After finishing her interviews.